HOW A GREAT TEA TOWEL IS MADE

by kathryn on 5th February 2021 in Cucina Rustica 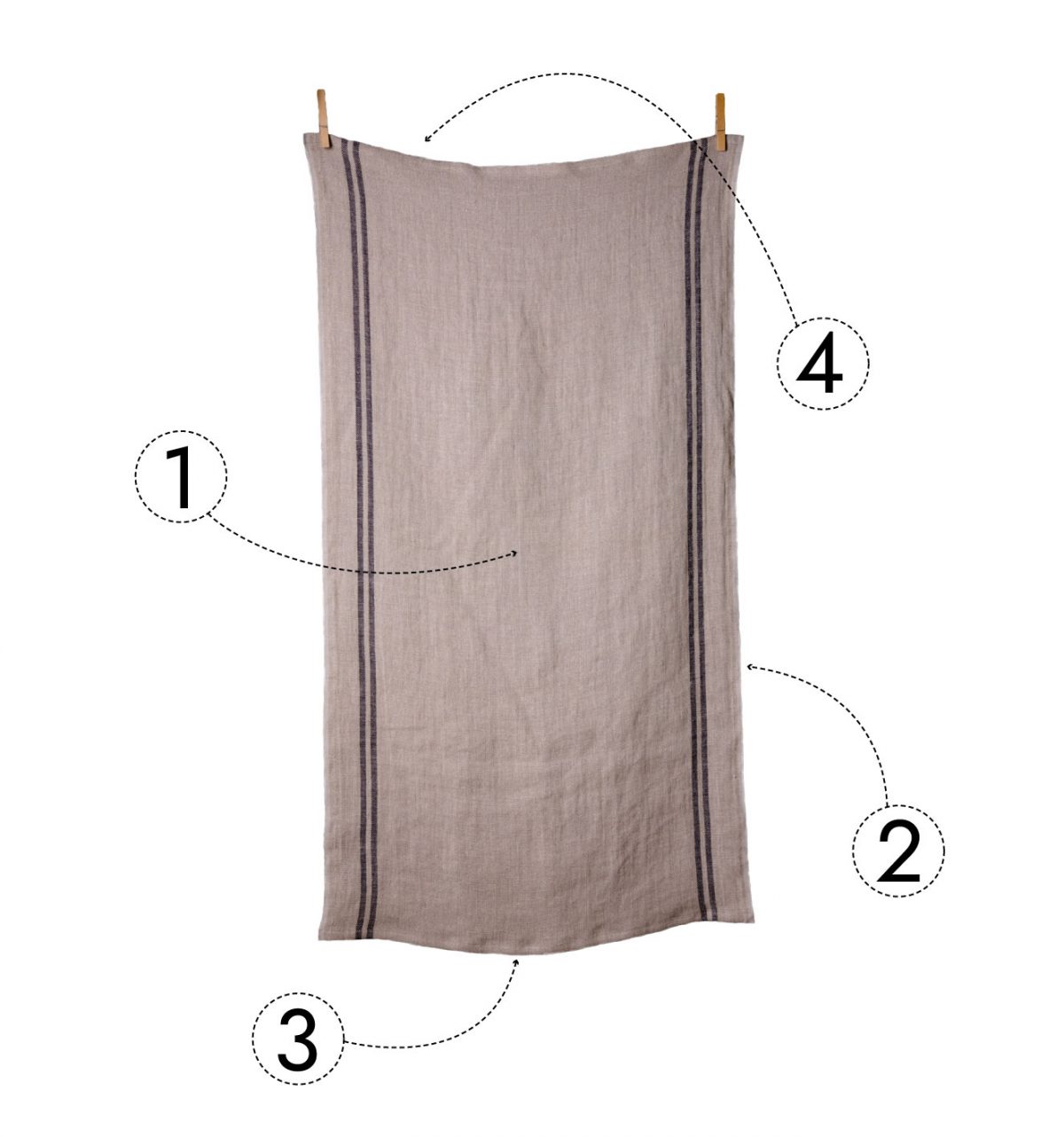 THE ANATOMY OF A CUCINA RUSTICA TEA TOWEL

The humble tea towel is expected to wipe, dry and strain and do it all while looking great. But most tea towels, although designed to look great, aren’t designed for the work and don’t perform well. So what makes a great tea towel? Let’s take a look…

1 – AN EXCEPTIONAL FIBRE AND FABRIC

Flax is a plant fiber. But unlike cotton which comes from the flower of the plant, the flax fiber is harvested from the stem of the plant. It has a crystalline-like structure that provides enough strength for the plant to stand in the wind and rain throughout the growing season. Happily this characteristic also results in very strong fibre which in turn results in a very strong fabric. .

Of all the plant fibres, flax is the longest fibre. The average length of a cotton fibre is between 6.5 and 10 cm whereas the average length of a flax fibre is between 10 and 100 cm. Why does length matter? Longer fibres make stronger fabrics and durability is what you want and need from a tea towel designed to work hard in a demanding environment.

Linen can absorb up to 70% of its weight in water. It has exceptionally good absorbency which is an essential trait if it is destined to become a workhorse tea towel. You can see just how much water our towels can absorb in this short video:

It has been shown through extensive research that linen has unique antibacterial properties and is more resistant to fungal growth. This plays an important role in a kitchen environment because tea towels are often damp and re-wet before completely dry.

Flax requires zero water or irrigation, meaning that seasonal rainfall is enough to grow it. It also requires a small and limited amount of fertiliser making it exceptionally ecological, especially when compared to other cellulose fibres. And here’s an incredible fact: The CELC states that flax is “A true « carbon well », each year one hectare of flax retains 3,7 tons of CO2”. How is that significant? According to the SFMC “A single hectare of mature trees absorbs approximately 6.4 tonnes of CO2 per year”, note mature trees. A single hectare of flax which grows for only 100 days retains more than half the carbon of mature trees.

The added bonus: Linen does not generate static nor does it pill!

2 – SELVEDGES ON THE LONG SIDES

Most woven fabrics have what are known as selvedges. These are the finished edges of the length of the fabric. They provide an edge for the weft or cross threads to wrap around and prevent the fabric fraying on the sides. Fabrics come in many widths, which are generally determined by the end use of the fabric. For example, curtain fabric is quite commonly about 3 metres wide. Fashion fabrics tend to be between 140 and 160 cm. And tea towel fabrics are about 50 cm wide.

Many mass produced tea towels are cut from much wider fabrics which require rolled hems on all four sides of the towel. There is nothing inherently wrong with this form of construction but the intersection of two rolled hems can create thick, unsightly corners. The most important fact is that a narrow cloth with selvedges indicates that the cloth was designed and woven to be used as a tea towel cloth. This means that considerations were made to ensure that the cloth is suited to the task of being a tea towel.

Cutting to a thread

Instead of cutting along a ruler or a ruled line, we cut to a thread. We choose a thread and cut alongside it from one side of the fabric to the other.

Folding to a thread

We then measure the hem width and instead of measuring all along the hem and pressing, we fold the hem along a thread. As it is a rolled hem, we do this twice for each end of the towel.

Sewing to a thread

Finally, while sewing along the hem edge, we precisely sew adjacent to the thread that runs along the edge of the fold.

The result is a hem that follows the natural weft of the cloth, that is in relation to the structure of the cloth, absolutely straight. This hem will not distort as it is laundered over and over again. It will retain a natural shape. And as the seam does not twist and contort, it will have greater longevity.

Aside from gas flame burns, hangars are usually the first thing to fail on a tea towel, so we’ve chosen to use hangers made from 100% linen. The woven tape is exceptionally strong and typically used for bag handles. And, in the event that it does fail over time, for the cost of letter postage to your address, we will send you a replacement hangar and matching thread so that you can repair it.

We’ve actually got repair kits for all sorts of unpredictable situations, take a look.

You can find out more about which cookies we are using or switch them off in settings.

Our website uses cookies so that we can provide you with the best user experience possible. Cookie information is stored in your browser and performs functions such as recognising you when you return to our website and helping us understand which part of the website you find most interesting and useful.

Strictly Necessary Cookies are enabled by default. They are used to remember your cookie preferences, to operate the shopping cart and to facilitate basic site functions.

We use Google Analytics to help us collect anonymous information such as the number of visitors to the site, and the most popular pages. Keeping this cookie enabled helps us to improve our website.